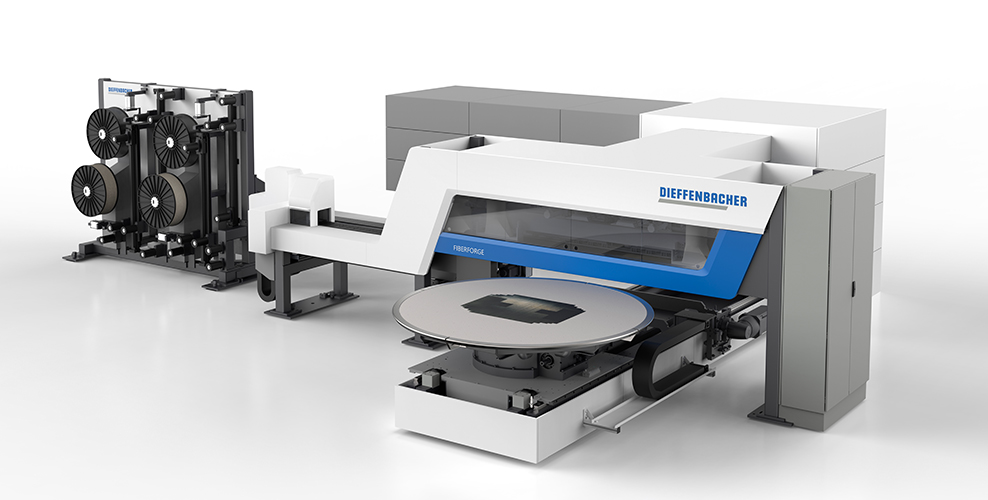 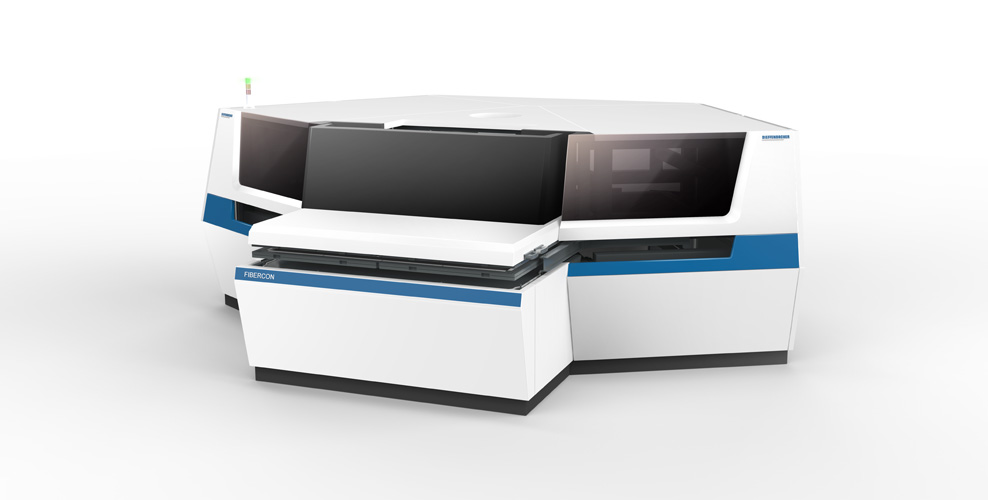 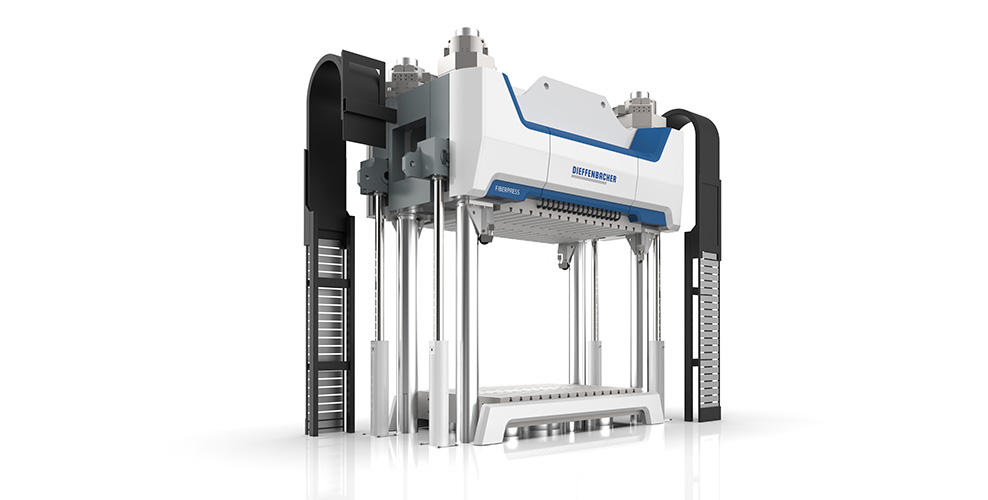 Fiber-reinforced cladding or structural elements are in great demand in times of lightweight construction, especially in the aerospace and automotive industries. In order to reduce production costs, process automation is currently at the top of the agenda for parts manufacturers. What an integrated and automated process can look like is demonstrated by the medium-sized plant manufacturer Dieffenbacher, a family-owned company near Heilbronn with high innovation potential in the composites sector. Dieffenbacher has developed the Tailored Blank Line especially for processing thermoplastic fiber tapes (LFT), consisting of three coordinated machines that together map the complete manufacturing process. Fully automatically, of course. This produces near-contour, three-dimensional components with reduced waste and high precision in short cycle times. This makes the Tailored Blank Line suitable for large-scale production.

The first machine in the production line, called Fiberforge, produces the so-called layup. The tapes reinforced with carbon, glass or natural fibers are cut to length from the spools according to the digital specification and placed on the assembly table. Because it can be rotated and moved, the table allows the unidirectional tapes to be deposited according to the specified load profiles for the parts. Fiberforge uses ultrasonic weld points to fx the tape layers, so the layup can be safely transferred to the next machine by robot.

The next station in the process chain is used to consolidate the layups, i.e. above all to eliminate air inclusions that cannot be avoided when laying the tapes. For this purpose, the workpieces are heated up to 400°C by infrared heating. The Fibercon can accommodate three workpieces at the same time, thus guaranteeing high throughput.

Final forming with the Fiberpress

Once again, an industrial robot picks up the component, which has now matured into a tailored blank, from the Fibercon and places it in the die of the Fiberpress. The compact press transfers the flat laminate into the three-dimensional finished part with pressures of up to 50.000 kN. Its short-stroke cylinders require little hydraulic oil and allow short cycle times in this process step as well. For safety reasons, the design of the press is kept open so that it is possible to see what is happening in the pressing area at all times. Overall, as is necessary for automated plants, the machines operate in an area inaccessible to humans.

From the heating chamber to the press

The main design elements were then also incorporated into the Fibercon, such as the beveled front, the white base color, and the blue accents. Unlike the Fiberforge, the Fibercon is visually very calm, in keeping with the rather low-action heating function. Here, too, large glass surfaces allow a quick visual check of the processes - even from a distance. Finally, the Fiberpress is much more dynamic; due to its open construction, the design is primarily located in the upper area of the press. The fronts again feature Dieffenbacher elements such as chamfered edges, which also serve to separate the colors. This paneling, with a large, central maintenance flap, tapers towards the center, emphasizing the press's solid bearings and guides. In the press table at the bottom, the shape from above finds its counterpart, and the drag chains were included as accentuating design elements. In addition to the formal theme of the chamfer, all three presses are also united by their use of color planes. While white and blue, the company's CI colors, have top priority and emphasize the essential areas, secondary areas, such as cladding for control cabinets, take a back seat with their light gray. Dark gray, in turn, stands for static elements, such as the substructure or the base area.

The family design began with the tape layer, the Fiberforge. Here, defortec's design with its lines emphasizes the converting process, starting on the left with the free-standing tape spools, through the enclosed cutting area to the laying table. Transparent surfaces provide a clear view of the interior, while large doors facilitate maintenance. While the design draws attention to the action area, the vacuum unit and control cabinet remain subordinate. At the International Design Award of the State of Baden-Württemberg, the Focus Open, the Fiberforge received the Gold Award in the category of capital goods in 2017.

For all three plants in the process chain, defortec developed the industrial design. The design pursues two goals: First, it is to merge the three plants, absolutely different in size, layout and function, into a visually recognizable family. Secondly, the typical design elements of Dieffenbacher should also be reflected. A not at all trivial task that required a deep understanding of the manufacturing process and at the same time was subject to tight economic constraints.

The defortec services at a glance